The Mosque of Córdoba, Spain 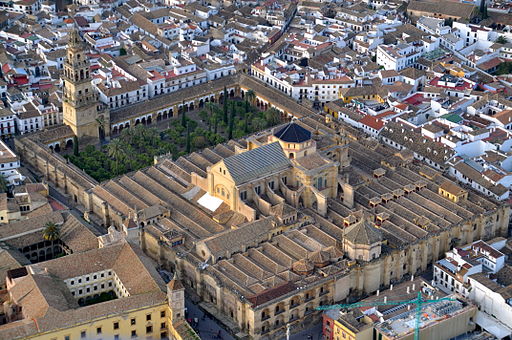 I swear this is the weirdest religious building I have ever been to. Even though I am by no means a religious man, I have been to quite a few in my life, but the Mezquita (mosque) in Córdoba, Spain is the most unusual. Traveling around Europe, which I have also done a lot of over the past 20 years, I have seen a multitude of churches, cathedrals, synagogues and a handful of mosques.

I must admit that I have rather tired of cathedrals. I mean its like Ronald Reagan infamously said at the height of the clear cutting debate in the early eighties, “If you’ve seen one Redwood, you’ve seen ’em all”. I wasn’t much of a fan of Reagan, to say the least, and I love Redwoods, but I after visiting probably over 100 really big and really impressive cathedrals I feel “I’ve seen ’em all”.

I have also visited a fair number of synagogues and they are usually pretty modest affairs. The hidden synagogues of Venice, Italy are pretty amazing, despite their modesty. You go into the “ghetto” there (that’s the Jewish Quarter and also the place where that word originates) and you walk into a plaza that looks like any number of old Italian piazzas and you simply do not see the three or four synagogues that your tour guide told you about. They are truly hidden. You enter a residential building, walk up the stairs, go through a very low key entranceway and then you are in the middle of an actual synagogue. Strange.

Another very bizarre house of worship which I visited, or at least attempted to visit, was in Jerusalem. If you are ever in the neighborhood I highly recommend you visit the Old City. Enter best through the Damascus Gate where you will immediately dive into a mysterious Arabian world more exciting than any Indiana Jones movie or romantic Arabian fairy tale. Don’t rush and do buy lots of products from the friendly sellers in their colorful shops. Stop by the cafe for a super sweet pastry and an even sweeter cup of tea. Let yourself be cajoled into buying a cashmere shawl for super cheap. Eventually you will be pulled toward the center of the city. Don’t even try to fight the magnetic force attracting you there. You will make it, I am sure, to the very same spot as I. You will be standing in front of a tunnel-like arcade full of even more enticing shops with friendly Arabs selling delicious spices, dates, pots and pans and you will know that just on the other side, less than 100 meters before you, is the miraculous Dome of the Rock with its golden dome and with the most famous rock in the world. Just across the plaza is the Al-Aqsa Mosque. Did you know that Al-Aqsa simply means the furtherst and was named that because it was the furtherst mosque that Mohammed travelled to before going to Heaven.

Standing in front of that tunnel all you have to do is walk through this bazar and you will be there. The only problem is that there are two young Israeli soldiers with very long machine guns who are stopping any non-Arab looking people from going in. Jewish Israeli soldiers allowing only Arabs into the most Holy spot on Earth. How strange is that?

So back to Córdoba, Spain. Here at the Mezquita its there are similarities with Jerusalem in that Christians, Muslims and Jews have populated this city for centuries, sometimes in peace, sometimes not. The Christian cathedral is actually hidden within the mosque. Hidden is Perhaps the wrong word. Its as if some super huge monster dude picked up this gigantic church and dropped it in the middle of this even more gigantic mosque.

Its a pretty mixed up place and the name pays tribute to it. If you look it up on the English Wikipedia (my current place of worship) you will find it being called “the Mosque-Cathedral of Cordoba”. When you walk up to it, however, you will see a big sign saying “Catedral de Nuestra Señora de la Asunción” and then in smaller, cursive print below “Mezquita de Córdoba”.
So what is it, a Catholic church or a Muslim mosque? After visiting the place I would clearly and unequivocally say, uh, not sure.

Looking back in history doesn’t really help us solve this riddle. It was originally built as a Catholic church (dear Miss Wikipedia failed to provide the date), then starting in 784 Abd al-Rahman began construction of a mosque that was to rival those in Syria and Baghdad. In its hay day a few hundred years later it was big enough to fit 15,000 worshippers.

Then in 1236 the Reconquista made it to the city and the Catholic forces took back the city from the Muslims. As often happened the one religion decided its place of worship has to be on the exact same piece of real estate as the last. The town council was against the construction plans mostly because they feared the new church in town would take business away from the other church across town. The guy with the most dollares won out and instead of tearing down the mosque he decided to just build a cathedral right smack in the center of the old mosque. I wonder what kind of drugs he was on.
Actually we should be thankful that this guy was daring and humorous enough to go through with it.