A little paradise on Mt. Figueroa

On an early Wednesday morning in May, I got into the car with Susa and three women from her book group and we headed south on the 101 towards the Santa Ynez Valley. I had agreed to go along even though I really didn’t know where we were going or what we were doing. Susa had said we will visit some people who built an adobe home.

The drive south from San Luis Obispo was beautiful in and of itself. Everything is green around here and the section of highway in North Santa Barbara County is full of gentle, rolling hills and oak trees. Parts of it are largely undeveloped and a pure pleasure to observe. There are also tons of vineyards, which gives the area a resemblance to the valleys of Burgundy, France. I have been wondering about these vineyards, however. They have been sprouting up all over California like wild mushrooms. Twenty years ago Napa Valley was the center of the wine industry. Today they are literally everywhere.

I mentioned to my fellow passengers that I really like them, but then we spoke of the problems involved. Somehow investors have discovered that they can turn a pretty penny with wine. The vast hills of California had previously layed fallow or been used for grazing. Just as other monoculture crop, the vineyards require tons of water and pesticides.

After about an hour’s drive, we turned past through the charming town of Los Olivos and headed East up a beautiful, little valley towards Mt. Figueroa. We passed Neverland, Michael Jackson’s old ranch. All you can see from the road is a big, ugly gate.

The road kept getting smaller and bumpier as we headed the 10 miles up the mountain. We eventually crossed into Los Padres National Park and found the little dirt road leading to the community. From the road it didn’t look like much. Turning the corner, though, we discovered an amazing view all the way down into the valley and over to the coastal mountains. A cluster of small homes, trees, gardens and assorted animals occupied the only flat piece of property on the mountainside.

We parked and walked over to discover a garden and some strange, brown houses. There are about five homes, and they all look like variations of some earth dwellings from The Hobbit. Betsy, along with her husband the founder of the community, greeting us with a big smile and a hug.

She and her husband bought this large piece of land about 15 years ago with basically nothing on it. For the first year they slept in a tent with their small children, then built the first yurt, then the first cob house. After years of hard work and lots of volunteer help they have a number of beautiful homes and even a Dojo where they practice Aikido. Their water comes from a few springs up the mountain, their electricity comes solely from solar panels. They have propane gas, wood stoves and compost toilets. They are literally “off the grid” and self-sustaining. They do grow their own food, but still rely on local markets and even CostCo for supplies. 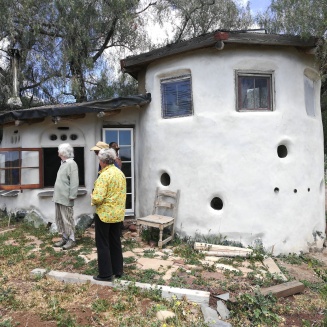 Betsy gave us a tour of the place. She showed us a little tiny house that was built for a grand total of $48 dollars. A highly successful British architect who had been building skyscrapers in Singapore decided she wanted to do something meaningful and so she came here and in three weeks built this wonderful dwelling. It has a special kind of fireplace which is floor level, has a large opening into the room and is extremely energy efficient. They are outlawed in the US because of the fire hazard.If you have a stone floor it seems safe enough.

The pictures can give you an impression of this little piece of paradise. Betsy and her husband now have grown children and after years of hosting workshops, desire to focus more on their own creative art work. 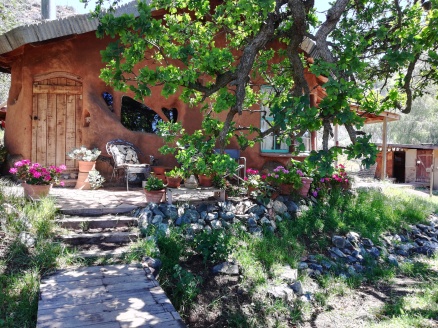 One thought on “A little paradise on Mt. Figueroa”