Even though I grew up in California, this was only my second or third trip to Yosemite. My Dad did take me and my sister to the mountains numerous times, but we usually went to the San Gabriel Mountains in Southern California. I can only remember one trip to the Sierra Nevadas with my Dad. We had an overnight hike up to a lake somewhere and even did some fishing. We went with a friend of his and his kids. The friend knew about fishing, which we did not. I can still taste that wonderfulness of fresh cooked rainbow trout. I also remember my Dad’s friend apologizing to my Dad for scolding me. Perhaps I was complaining about the long hike or my heavy backpack and the guy said something like “man up, kid”. I don’t remember being offended, just remember the guy apologizing and my Dad kind of brushing it off. I find it interesting why I remember that moment. I hypothesize that it’s because I was the center of attention and my Dad was conversing with this adult about something so personal as whether my feelings were hurt. We didn’t talk much about feelings in my family and I was seldom the center of attention.

On our recent trip to Yosemite up in the Sierra Neveda Mountains there was no fish and no scolding and no Dad, but the smells were there. Already on the long, curvy Highway 41 leading down into Yosemite Valley, the fragrance of pine and fresh, cool mountain air hit me. The mountains here smell different than the European Alps. There is no way I can explain it but it brought me right back to one of those childhood camping trips. 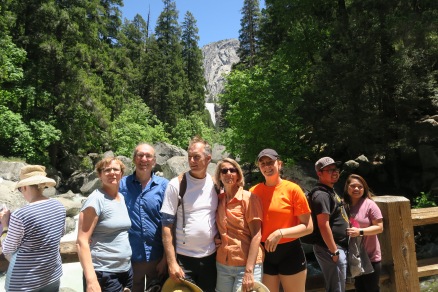 On Saturday morning Susa, Theresa and my sister and brother in law drove from our hostel in North Fork towards Yosemite Valley. I didn’t know what to expect because it’s been so long. The mountain road wound endlessly until unexpectedly the valley opened up in front of us. A chorus of voices cried, “Wow, look, pull over, now, quick.” I swerved across the double yellow line into a viewpoint area with a very low, stone wall. The sight was truly overwhelming. El Capitan, Half Dome and the long and wide valley floor were presented to us.

The previous couple days we studied maps, websites and apps to figure out where to hike and agreed upon Vernal and Nevada Falls. It is one of the more popular hikes and oldest trails with a distance of about 6 mi. (9km) and took us from the valley floor at 4000 ft (1220 m) to the top of Nevada Falls at 6000 ft (1830m).

The trail started steep, including stone steps, and it was overcrowded. The crowds didn’t bother me too much and they got thinner and thinner the higher we got. By the time we reached our goal at the top of Nevada Falls we noticed that we seemed to be about the oldest people up there. Most of the hikers were under 30. It’s encouraging to see so many youngsters out in the wilderness.

On the way up we walked on the appropriately-named Mist Trail which took us right up the wall leading to the top of the first water fall, the massive Vernal Falls. Its truly magnificent. The crashing noise and incredible volume of water was overwhelming. Thinking that for thousands of years so much water fell from those heights, relentlessly cutting into the hard granite rock gave me a sense of timelessness. The trail leads so close to the falls that at one point we got soaked by the heavy mist. At the base of both Vernal and Nevada Falls rainbows add their colors to the saturated scene.

One of the most impressive moments for me was reaching the top of Vernal Falls. You have to climb a series of steep stairs to ascend up the wall leading to the top. The noise is almost deafening and the white flow of power creates an palpable energy in the air. Once I reached the top of the Falls, that all changed. The noise disappears, and a rushing river and flat valley floor opens up. The charged energy is gone and leaves a gentle, peaceful atmosphere. Hikers are resting on rocks, dipping their feet into cold pools and gazing back down towards the open Yosemite Valley, proud that they made it all the way up.

Nevada Falls, 1000 feet higher, was equally impressive. We took a longer break at the top where a sandy river bank invites hikers to rest. Theresa and I collapsed and took a nap while Susa ventured over to the edge of the granite cliff. She said the view was amazing so I headed over there too. The edge was not clearly defined and it took me a bit to find the platform with a fence to look over. My acrophobia took over as I saw the edge and could only imagine how far the drop off was. I overcame my fear and was, at least, able to put my hand on the railing and glance down. Quickly I had to retreat to safer ground. I couldn’t see the waterfall below underneath me and I was too nervous to try. A girl and two boys were actually sitting on the edge with their feet dangling over, with 1000 feet of air between their shoes and the next rock below. One of the boys moved quickly back from the edge to safer ground. The girl called “hey, you scared?” The boy didn’t respond but I said aloud, “sure as hell is scary for me”. “Ah, come on, it’s not scary,” she yelled. The innocence of youth, I thought.